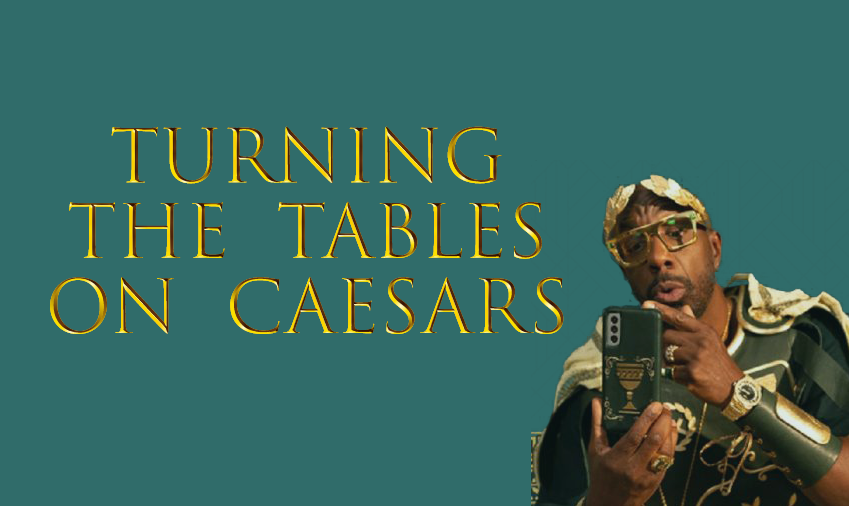 If you’re active on Twitter, you may have recently seen a tweet thread from our guest contributor who goes by the name, Telemachus. He outlined how he discovered a weakness in the way a sportsbook graded player prop wagers that enabled him to have a large advantage over the house. He kept hammering that inefficiency until he had taken his meager bankroll from just a couple thousand dollars to a six-figure powerhouse.

Telemachus is going to walk us through another angle he discovered and exploited. The play is long dead. However, there is a lot of value in understanding his process. Edges like this exist all over the sports betting landscape, you just have to find them. Then when you find them, you have to practice some of the Art of Sports Betting to extract profit from the situation.

The Anatomy Of A Betting Angle

The origination of this play came from a discussion on the Unabated Community Discord about which books had weak first inning lines. The Discord is filled with a lot of people eager to assist each other. Not necessarily with direct plays, but with helping people find answers to their questions. This conversation got me thinking about lines on innings other than the first inning. Poking around through various sportsbooks, I came across Caesars Sportsbook offering moneylines on every inning of the game.

For the most part, these lines didn’t offer immediate value. They were all keyed off the game line. However, one inning stuck out, the 9th inning. 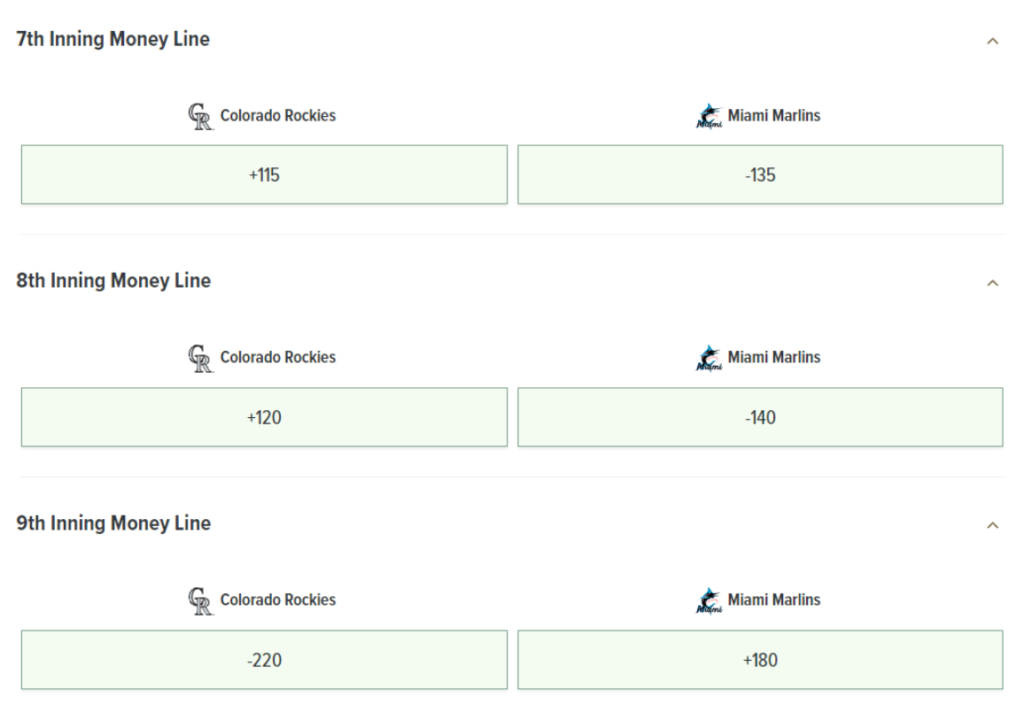 In this game, the Marlins were at home and a fairly heavy favorite. They were also favorites in every inning except for the 9th where they were an even heavier dog. The change from 8th inning to 9th inning prices was due to the fact that the most likely scenario was that the home team would be ahead going into the bottom of the 9th and wouldn’t get a chance to bat. This pattern repeated in every game they offered. And, at first glance, those prices all seemed fair.

Researching The Rules and Building a Hypothesis

Similar to how I had found the player prop grading edge that I exploited at BetMGM, I began to read Caesars House Rules. I was surprised to find a section dedicated to Innings Betting:

While the pricing of the wager clearly indicated that perhaps only the visiting team would bat, the rules stated that the “full inning must be completed for bets to stand.” As Captain Raymond Holt would say, Bingpot!

This left us with the following scenarios when betting on the home team in the 9th inning:

This meant that while my bet was likely to push or be voided, when the home team did bat, I was getting + odds, even in games where they were possibly heavy favorites.

While this certainly felt like a very positive expected value situation, I wanted to be sure that even in the worst possible conditions I had an edge. So I queried an online database which had inning results. I didn’t have historical odds so I just assumed the worst odds that I had seen for a 9th inning home team bet (+170) and applied that to every game over the past few years. Even when the home team was a large underdog pregame, there was a theoretical edge on this wager given my worst-case pricing.

Playing an edge like this is almost certainly going to get your account limited once Caesars figures out what you’re doing. So, the next question was, is it worth it? Caesars isn’t as quick to limit as some of the other soft books which makes them more valuable. My general rule of thumb is that an account is worth $15k-$20k. If I can expect to make more than that before getting limited, the angle is worth playing. Judging an angle against the cost to the account longevity is a concept Rufus and Jack wrote about previously.

What did the numbers say here? Well, at the assumed +170 odds, playing every regular season game last year for the $3k limit that Caesars takes on this bet would have netted roughly $250k, or, roughly $40k per month. Based on the characteristics of the bet we were making here, I assigned a high probability to being able to avoid detection for at least a month. Given that, the expected return on this play, even if it would last just a month, was high enough to warrant likely burning an account.

Now the question became not only how much could I bet, but how much could I bet and avoid drawing too much attention to their flaw. My plan at the beginning was to pull in a few trusted partners and have us each bet a portion of the games that day for close to, but not right at, the $3k max. We’d vary up the betting amounts as well. I still think that plan is a solid one. Executing on that plan though, in the face of variance and other obstacles, is much tougher.

The Execution Of The Betting Angle

Getting ready to execute our betting angle seemed to be going well. I pulled in a few trusted partners and we started betting the slate as planned. Variance was not kind to us though. Home teams went through one of the worst 9th inning stretches over the past few years right as we started betting. This was further exacerbated by our random selection of games managing to have less money on the games that actually won.

I’ve been incredibly fortunate so far in my short gambling career. Not only have the odds been on my side but variance has been as well. Up until this point, my bankroll had steadily increased each month with a rather uncanny consistency. I was not prepared to stay calm and act rationally while I watched 20% of my bankroll disappear in the matter of a few days.

I made the mistake of preferring short-term gains over long-term ones and deviated from the original plan. We started betting every game each day. I was pressing trying to let the law of large numbers work for us faster. Looking back, we should have stayed the course in the distributed approach. Hindsight is 20/20 of course. At the time it felt like the right move. However, when we started making our initial loss back, Caesars started limiting us on just this market. In fact, we weren’t even back to even yet.

Pivoting My Approach – Expanding My Network

While Caesars picked up on our betting pattern, it’s not clear they actually understood what we were doing. They left the 9th inning markets up and didn’t change their house rules. But, I was out of people I had a trusted relationship with who could actually bet these markets.

I made the decision that the risk of sharing the angle and having it leaked was better than not betting it at all. I made the choice to form new partnerships with acquaintances on Twitter and from the Unabated Discord Server. Just like that, we were back up and running. 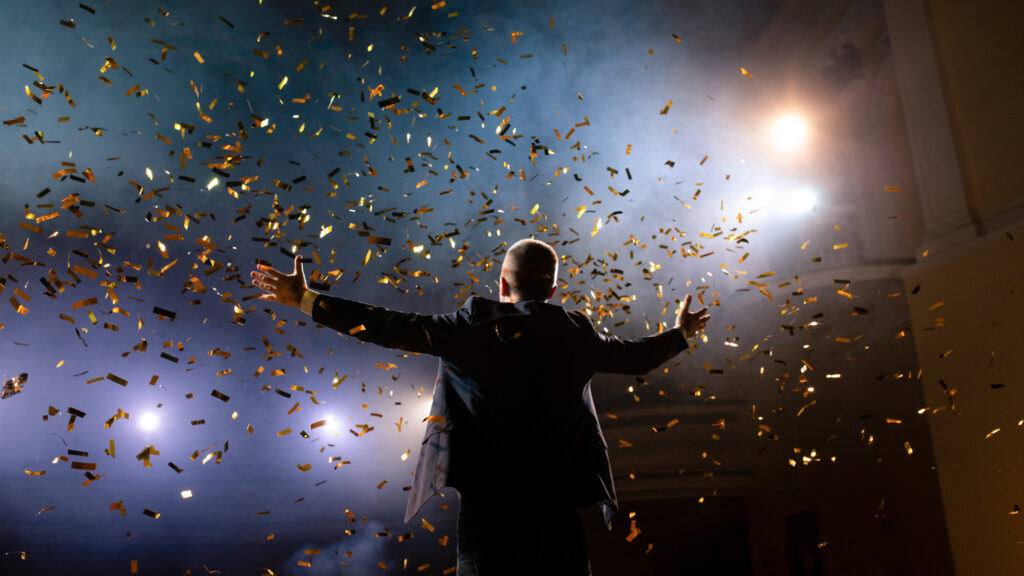 Fortunately for me, the bad variance didn’t last. Over the next few weeks, home teams started winning again and, more importantly, we stuck to the original plan. We were able to bet this consistently for a number of weeks. It was a much slower climb out of the hole but the angle was profitable and moreover, my partners profited as well. Things were looking up and I had thoughts of how much further we could scale this.

We’ve all heard the saying “it’s better to be lucky than good.” I disagree. There’s no better feeling than when you find a way to win, execute the plan, and it actually succeeds. And when things get rolling, it’s incredibly satisfying to wake up each day knowing that you’re the one with the edge, not the house. Until they catch on, of course.

In the end, Caesars finally caught on to what we were doing and eliminated the 9th inning markets altogether. I waited a while in case they reconsidered or came up with new odds. However, they haven’t. I only netted about $20k from this venture, which is lower than I had been projecting, but still a nice score.

More importantly though, I was pleasantly surprised by the new partnerships that were formed. Sharing a profitable angle with someone you’ve never worked with before is daunting. Fortunately, I saw no signs that the angle leaked, and there were no issues settling up. Furthermore, those new partnerships have continued to deliver profits even after this angle died. Altogether, that has made the sting of losing my personal Caesars account much less painful.

With anything in this business, you always need to keep learning. Learning new skills and learning new angles. However, learning from mistakes is probably the most valuable of all. I definitely learned quickly that downswings do happen. Even with a fat edge, you can still lose. It was a wake-up call but I’m probably stronger for having gone through that.

We started out attempting to disguise our betting across accounts, but a little bad variance took us off course. Should we have had more cover bets? Should we have split up the bets better? It’s tough to say if any of that would have avoided detection though. It wasn’t until we started winning that detection came swiftly.

When I had to pivot and seek some new partners, I was very uncomfortable. Maybe I got lucky in who I worked with, but it opened my eyes to the strength of having a good network. I suspect next time we’ll be able to rely on past experience to have a better understanding of how hard to push things and how to make it last a little longer.

For now, it’s onto the next angle as I continue to try and find ways to grow my bankroll and profit from sports betting. Thank you for reading this one and I hope you’ll think of me if you’re looking to partner up on something you’ve found.