The DraftKings Sports Betting National Championship may be a mouthful to say, but for a few sports bettors it’s going to be a pocketful of riches. It has been 34 months since the last DraftKings Sports Betting National Championship (DKSBNC) and the infamous last minute controversy involving Unabated’s Rufus Peabody. In those 34 months, the footprint of legal sports betting has expanded greatly in the US. The 2021 installment looks to be much larger with a more clearly defined scope. Does it present an opportunity to skilled players? Or is DKSBNC a crapshoot? In this exclusive two-part joint article our Unabated betting experts, Rufus & Jack, will explore strategies for the tournament and simulate the projected results.

Those are the big numbers to know. Like last time the DraftKings Sports Betting National Championship (DKSBNC) will have a $10,000 entry fee. Of that entry fee, $5,000 becomes their bankroll for the tournament. At the end of the tournament, the player can keep whatever funds remain in their tournament bankroll.

You can play the tournament in 11 states: Arizona, Colorado, Iowa, Michigan, New Hampshire, New Jersey, Pennsylvania, Tennessee, Virginia, West Virginia, and Wyoming. Compare this to 2019 when it was solely in New Jersey. You can play the entire tournament online from any of those states listed. They will also have a live venue in Weehawken, NJ where you can BYOD (Bring Your Own Device) and play from there.

Will There Be A Tournament Overlay? 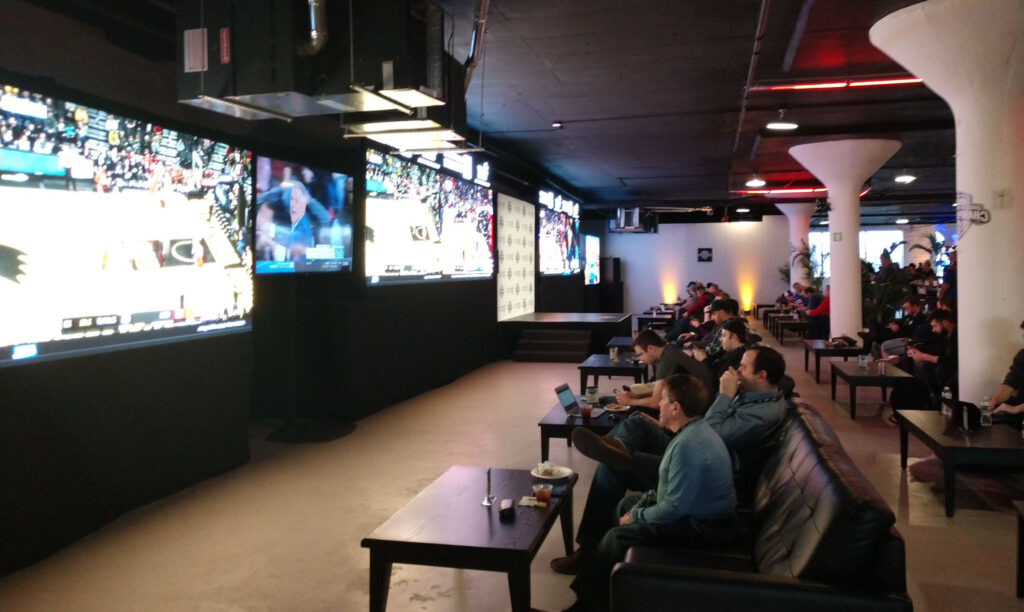 As discussed in Unabated’s articles about NFL Handicapping Contests, there’s always the possibility an overlay will make the tournament a positive expectation (+EV). This occurs when the expected payout per player exceeds what they contributed to the prize pool.

Calculating the expected value of each entry is not as straightforward as, say, a DFS contest, where the prize pool includes all entry fees (minus the rake). In the SBNC, half of the entry fee is an active bankroll, meaning that $5,000 does not go towards the prize pool. Rather that money is yours to bet with and  to keep at the end of the contest (if you have any left, that is). If we lived in a world with no vig, the value of the $5,000 bankroll would be $5,000.

In that world the entry fee would really only be $5,000, as that is the amount a user is paying that is going towards the prize pool. To get the EV of an entry (assuming no skill) we’d evenly distribute the overlay, the difference between the prize pool and the sum of all entry fees among all entries. 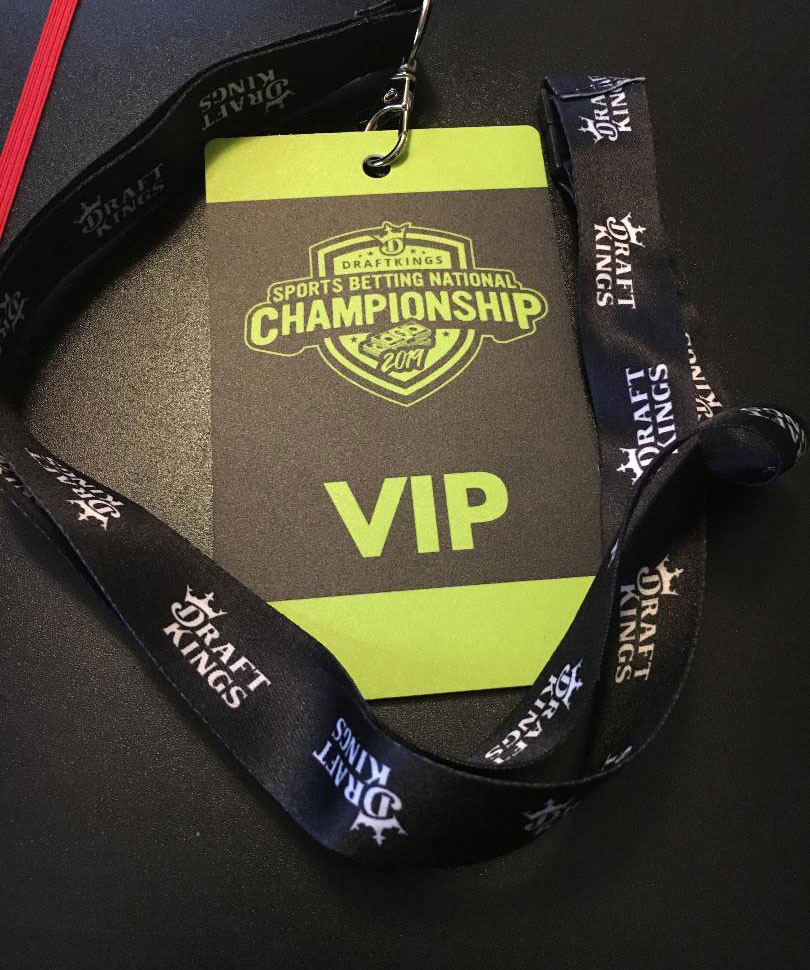 However, it’s not that simple. Since we don’t live in a vig-free world, we need to consider the EV of your wagers. You may be a winning sports bettor, but, if you’re playing this contest optimally, you may not be placing +EV bets. Since a full HALF of all the prize money goes to first place, an aggressive strategy is optimal, and that may require placing parlay bets (where the vig compounds) or huge longshot bets, which may be quite -EV. To calculate the true expected value, you need to factor the expected EV (yes that is expected twice in a row) of your wagers. In 2019, the average return of a bet was -4.5%. That number is, of course, very close to the organic hold on standard sides and totals.

For this year, with a guaranteed prize pool of $2,000,000, the number of entries for an overlay is 400. Anything less than 400 and there is an overlay, BUT once you calculate expected return on your bets, that number is effectively smaller. In 2019, the average entry wagered approximately $18,010.70 and lost approximately $810.48. Using those numbers, the magic number of entries is 344 or fewer for an entry to be +EV.

For 2021, with 10 additional states to play from and a smaller guaranteed total prize pool, there will probably be more participants but an overlay is still likely. As of Tuesday, November 2nd, only 77 entrants are confirmed. However, that number is misleading. The large entry fee of $10,000 naturally causes most participants to choose to submit their entry money as late as possible.

Adding to the uncertainty is the ability to late register. DraftKings permits registration up to 6pm on Saturday, November 6th. A player could theoretically watch the first 24 hours of the tournament before deciding if it is +EV for them. However, the hype for this event has been fairly tame and a lot of those value seeking Advantage Players may not have this on their radar.

There’s also the consideration that there will be some people in the tournament who will be dead money. They may have won their entry into the tournament and they are more than happy to take the $5,000 real-money bankroll as their prize. They either won’t wager a dime (making them ineligible for the prize pool) or they will wager the minimum safely. These factors make the concept of an overlay even more likely despite the number of entrants. We’ll discuss how the competition influences the EV numbers in Part II of this article.

The 2019 DKSBNC was famously marred by confusion and frustration of last second wagers not being permitted due to slow grading of a previous game. To alleviate this in 2021 they’ve modified some rules.

First, the scope of permissible sports has narrowed. NBA, CFB, and NFL wagers only. Additionally, wagering is pregame only. No in-game betting. You can not leverage Cash Outs either.

You can bet on sides, totals, moneylines, alt lines, parlays, teasers, and props. However, if the state you are playing from restricts certain types of bets (betting on in-state college teams in New Jersey for instance) you won’t be permitted to wager on them in the tournament.

On the final day of the tournament, November 7th, your wagers must be in before 1pm ET. You can only wager on the following November 7th games:

That’s it. No Sunday Night Football game and none of the three NBA games that tip-off after 6pm. Additionally, you can not wager on any bet that would include one of those prohibited games. For instance, replicating some 125/1 magic on someone like Mike White leading the NFL in passing this weekend is not possible. That wager is void because it includes the Sunday night game.

The lack of sports beyond these three will hurt some of you who specialize in obscure sports and leagues. However, it does create a more apples-to-apples comparison for deciding the ultimate winner. Not that this tournament is a representation of true handicapping skill though.

What About Limits In the Tournament?

The natural question asked by many sharp bettors is “Will I actually be able to wager what I want to wager?” In the 2019 tournament, the limits were very generous. Many players had moonshot parlays that would have netted over $100,000 that were accepted instantly. Many others had big money bets on player props.

You are given a special tournament account for your betting in this event. That permits you to be outside your normal tolerance limits with the DraftKings risk management team. DraftKings indicates relaxed limits for the tournament but within reason. It might be tough to stake $50k on a player prop in the tournament for instance.

I think it is safe to assume you’ll have no trouble betting sides or totals up to any limit. Submitting parlays on straight bets with large payouts should be accepted easily as well. If you are a bettor frustrated by DraftKings limits, this tournament is an opportunity for you to bet freely with a $5k bankroll for a weekend. Using the tournament as a weekend-long hall pass is one way approach, but probably not optimal to win the event.

In Part One we focused on the specifics of the tournament. In Part Two, we will discuss the different strategies that bettors will employ. We will then simulate the tournament using different strategy parameters to formulate an optimal way to approach the tournament. We will also provide you with a key list of Do’s and Don’ts if you plan to enter. It is a landmark article that you won’t want to miss. The exclusive content in Part Two is a valuable resource not just for this specific event, but handicapping contests like this one going forward.