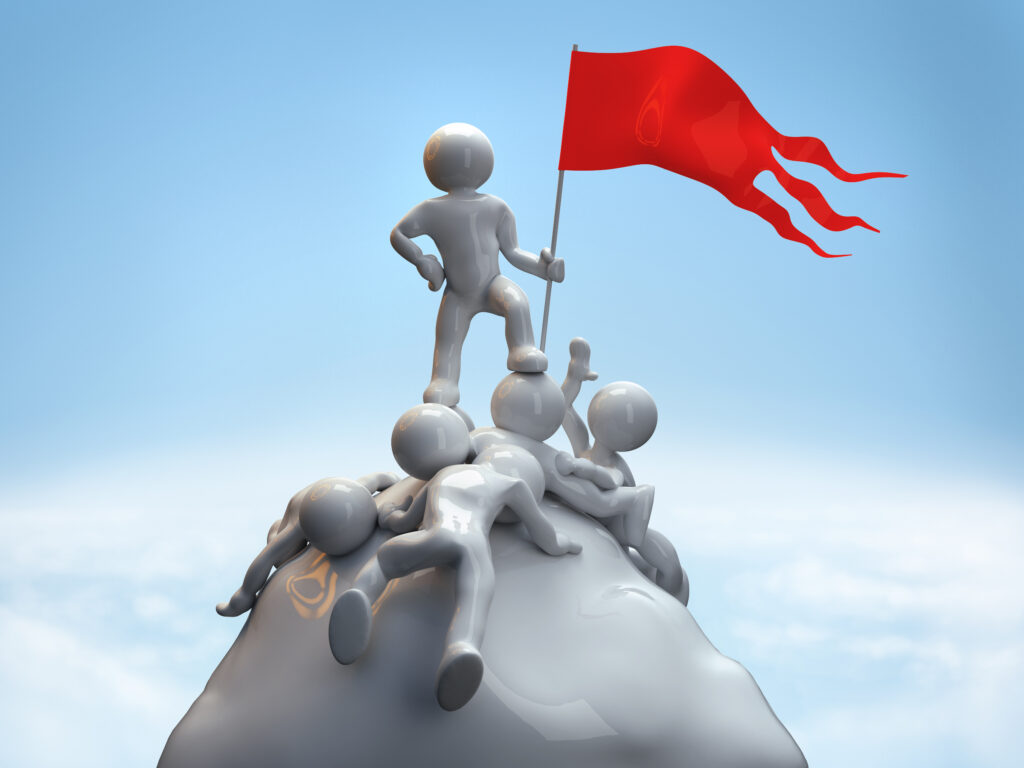 Last week we established the allure of NFL handicapping contests for both the sportsbook as well as the bettor. NFL elimination contests take that to a whole other level with their simplicity. Pick one game each week. If your teams wins, you move on. If your team loses, you are eliminated. Oh, and you can’t pick the same team twice. What begins as a trivial exercise in Week 1 becomes a grueling gauntlet a few weeks later.

This week we will take the same formula for success that we outlined in NFL handicapping contests and apply it to NFL elimination contests such as the popular Circa Survivor contest in Nevada.

Most NFL elimination contests do not require you to pick against the spread. You just pick an outright winner each week. One notable exception is the Last Man Standing contest at Stations Casinos in Nevada. For years, they were the popular elimination contest in Las Vegas despite similar contests being run at other sportsbooks such as William Hill.

Again, along came Circa Sports to shake up the scene in 2020. They launched Circa Survivor which was played without a spread. Just pick a winner each week straight up. They offered a $1 million dollar bonus split among anyone who could go perfect over the course of the season. However, they made Thanksgiving its own week. In 2020, large upsets were less frequent and 35 out of 1,390 entrants completed a perfect 18-0 season. That winner-take-all $1.39 million dollar prize (plus $1m bonus) was split 35 ways.

This year, despite the NFL season expanding by one week, Circa has made winning the bonus even harder. Christmas games are their own week and to achieve the bonus you need to save Tampa Bay or Kansas City until Week 20. However, to sweeten the pot they increased the guarantee to $6 million and it is shaping up to go off with a hefty overlay. More on that in a minute.

In addition to Circa, some regulated online sportsbooks, such as DraftKings, also offer elimination pools with guaranteed top prizes. As is the custom for regulated online sportsbooks in the US these days, they have no fear of leaving an overlay on the table for the advantage players. The DraftKings contest looks like it’ll go off with a $300k overlay for the $333 entry fee.

The Plan For Profiting In Elimination Contests

As mind-boggling as it may be, there are people who forget to put their entry into these contests for Week 1! Last year, famous advantage player and Las Vegas Advisor publisher, Anthony Curtis, made that contest-ending mistake. If you don’t submit an entry – you’re out!

Your preparation adds to your EV. You get to overcome the dead money in the pool from entrants that didn’t take the time to study the rules. If you’re in Circa Survivor this year, pay close attention to that Christmas week where the window to get your play in for games on 12/26 is only NINE hours!

Enough with the small talk let’s bring some math in here to quantify how you’re going to find an edge in a contest where almost all the prize pool goes to most likely one entrant. Calculating and projecting an overlay is the first concept. This is done by dividing the prize pool by the number of entrants. Circa is currently getting a lot of attention due to the impending eye-popping overlay in Circa Survivor. 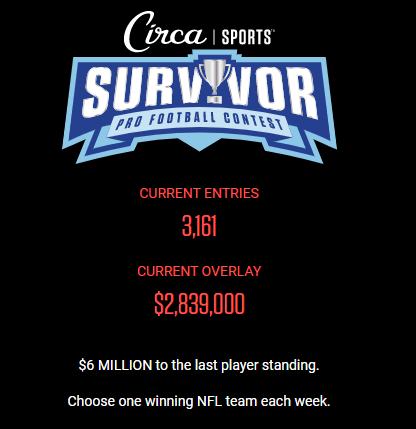 Your odds of winning an elimination contest are much like your odds of hitting a parlay since you’re going to need to rollover a streak of picking a winner longer than anybody else in the contest. The advantage is you don’t have to pick against a spread. Some weeks of the NFL season there are teams that are -400 favorites (80% implied probability) based on the moneyline. Other weeks maybe a -120 (54.5%) is all you have left to use.

Even if we assumed you could find a 63% chance to win every week, the odds of you running off 20 straight winners is 0.63^20 = .000097, or roughly 1 in ten thousand. Fortunately for you, you’re not competing against the house in a challenge to rip off 20 winners in a row. You’re competing against other entries facing similar odds.

Estimating How Long an NFL Elimination Contest Will Last

In our previous article, we spoke about handicapping your opposition just as much as handicapping the games. Similarly here, we need to figure out what the other contestants will largely be doing as they approach the contest. Overwhelmingly, NFL elimination contests follow a predictable pattern. People play the heavy favorites. It gives them the biggest odds of surviving. In our Process section we’re going to explore why that’s not always the best strategy. However, for now let’s correctly assume almost everyone in the contest will pick winners at a 63% success rate.

That means that roughly 63% will survive each week. However, how long would we need to survive to win a contest like that? We can use the LOG function in Excel to give us an estimate. All we need to know is how many entries are in the contest and what their projected success rate is:

In the current Circa Millions, there are 3200 entries and we will estimate a 63% success rate:

That is projecting an elimination contest with 3200 entrants and a 63% pick success rate will on average resolve around week 17.47 (we can round up to 18 since there are no partial weeks). You can play around with those numbers a bit to create your own projections. Circa Survivor will likely go off with more entries. You may also want to tweak the predicted success rate per your inclination.

Either way, the answer does provide us with a key piece of information: This is a marathon, not a sprint. Circa Survivor is likely to last nearly to the end of the season. That slate of Christmas games could be the decider. That brings us to our next key concept, Process.

The biggest misnomer in these NFL elimination contests is that the object is just survive the longest. After all, it’s called Circa Survivor. Ironically, it is the logo for the long-running reality show Survivor which gives us a clue about how these should really be approached.

In these contests, you are in first place until you finish in last place. There is no second-place or consolation prize. In fact, I would contend the worst outcome is to make a deep run in this contest and come up short. You wasted a lot of time.

Instead, your goal shouldn’t just be to survive, but to outwit and outplay your opponents. Identify points where you can hopefully eliminate a large portion of your opposition while you survive to the next week. It is obvious that most of the entries will focus on the biggest moneyline favorite in the week. This is especially true early in the season.

This is the time you can look for a mediocre team playing a bad opponent. Maybe the 3rd or 4th best value based on moneyline. You save some heavy hitters for later in the season and you position yourself for a modest contrarian swing. Many of your opponents aren’t thinking about the pick you are making, but you are certainly thinking about them.

Many players will quickly reach for the relative safety of taking their last best option as their available remaining teams dwindle. They are painting themselves into a corner with this approach. Remind yourself that there is no second place and be willing to take a risk before you are left with just the bad options.

You don’t have to take the opposite of what everyone will be playing. For instance, taking the Texans in Week 2 in Cleveland is a bridge too far. However, instead of taking the Browns there, look for a game that very few will be playing. Many weeks, this might be the Thursday Night game.

Perhaps people think Thursday games are trap spots for some teams. Perhaps they don’t want to ruin their entire weekend by flunking out of the elimination contest days before. For whatever reason, people tend to avoid picking Thursday games. Use that to your advantage.

In the previous article, we explored having a two-speed approach. Staying with the pace of traffic and trying to pass the traffic. Staying with the pace of traffic isn’t an option in elimination contests. You want to always be trying to pass traffic. You don’t have to take a home run swing every week, but you should at least be looking for the road less traveled. That brings us to the final key concept, your path.

Just like NFL handicapping contests, you need to establish an endgame strategy with NFL elimination contests. The difference is endgame starts almost at the beginning of the contest. You need to plot out your path right from the jump. You can change your path as the season goes on but you’ll need to factor in how those variations alter your path.

One tool I’ve found that I honestly wish we had here at Unabated is SurvivorGrid.com. They offer a useful way to quantify and visualize the path forward for elimination contest participants. Of course, you can be sure other players have noticed SurvivorGrid as well and will be using that tool.

In a contest such as Circa Survivor your path must account for the Thanksgiving and Christmas games, which limits your pool of teams to only 6 teams on either window. Some players will be tempted to shoot the moon and aim for the extra $1 million dollar bonus if you go 20-0 and save Kansas City or Tampa Bay to the end. In my opinion, that path is just impossibly difficult which makes that million dollar bonus barely move the needle in value. You can be sure some of your opponents will value it though.

My advice is to create a path now and revisit it frequently. Don’t wait until early November when you find yourself still surviving but with dwindling options. You’ll have visions of a $6 million dollar prize in your head by this time, but no realistic path to get there.