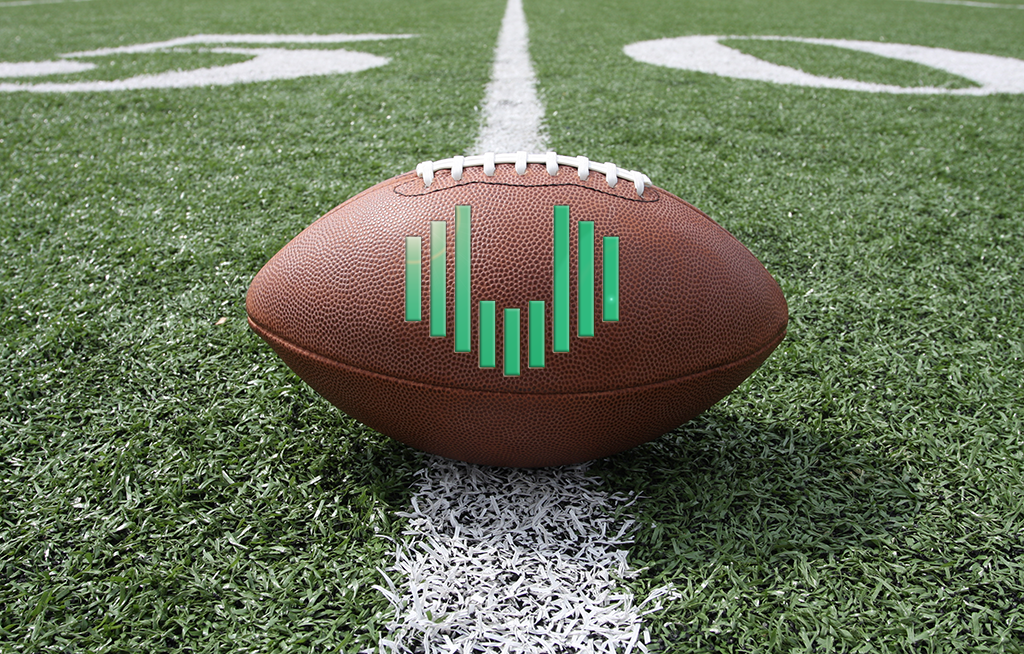 Through 18 weeks from early September to early January, you had your routine. Betting the NFL involved checking early lines on Mondays and Tuesdays. Then reacting to injury information on Thursdays and Fridays. Hunting player props on Fridays and Saturdays. Then finishing up with teasers on Sunday mornings. You dabbled with some halftimes and in-game bets. Perhaps the profits weren’t what you expected, but you enjoyed it. However, now only 13 playoff games remain spread over 4 weekends. Is NFL playoff betting just a last hurrah for the season, or does it require a different approach? Let’s explore some ways you might want to change up your game plan.

As we head into Super Wild Card Weekend (their title, not mine) we have six games spread over 60 hours with no picture-in-picture required. Much has been made this week of the influence of injuries on the spreads in certain games. For the most part, the spread in a playoff game is very similar to the spread in a regular season game. Key numbers of 3, 6, & 7 still rule. It is fairly representative of the relative strength of the two teams.

However, totals tend to be lower. Colder January weather does have an effect in some cities. Some of this is also due to the old adage of “defense wins championships.” For whatever the reason, we do see lower totals among teams that have previously faced off this season. This year’s Super Wild Card Weekend features matchups of teams who have all faced each other previously this season. From Dallas and Tampa Bay meeting again for the first time since Week 1 to Baltimore and Cincinnati meeting again for the first time since last Sunday.

In 5 of the 6 Wild Card matchups, the market consensus total is the same or lower than it was in their regular season game. This doesn’t necessarily create a viable angle. It’s just the nature of playoff football. Don’t be surprised if there is not as much scoring this weekend as you would have expected.

Since Unabated unveiled our Teaser Shopper, there’s been a lot of focus on finding profitable teaser bets in the NFL. Traditionally, the Wild Card round represents the last viable weekend to shop for Wong Teasers. There’s just not a large enough selection of games past this weekend. 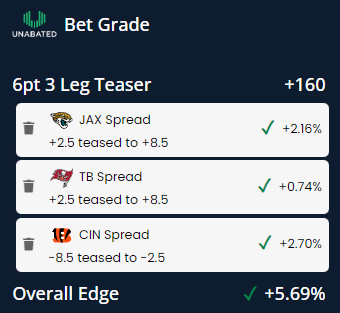 That’s the bad news, the good news is, Wong Teasers are very strong in the Wild Card round. This is due to a combination of market lines having grown more efficient as the season went on as well as less variance in results. While blowouts do occur in the NFL playoffs, they are a bit less frequent. Those added points from a Wong Teaser come in handy in the playoffs.

For this weekend, a popular Wong Teaser combination will be:
Jacksonville +8.5
Cincinnati -2.5
Tampa Bay +8.5

No complaints for us. Get the teaser action in while you can. Next week when we’re down to four games, there will be some that advocate teasing. You can always verify for yourself using our Teaser Shopper tool.

Did you enjoy betting NFL props this season? Maybe this was the year you made the leap from DFS to real sports betting and did so with player props as your gateway drug. Congratulations – you ain’t seen nothing yet. Props get more pervasive as the playoffs march on. Of course, it all culminates with the biggest prop betting event of the year, the Super Bowl. By the time the Super Bowl kicks off, over half of the wagers placed on the game will be on various prop bets.

As you might expect from a site co-founded by the Prince of Props, Rufus Peabody, you’ll be able to find plenty of content on Unabated related to Super Bowl prop betting. In the meantime, the Wild Card, Divisional, and Conference playoff rounds offer plenty of prop betting options.

As mentioned earlier, the teams this weekend have all faced each other previously this season. However, don’t expect prop performances to repeat themselves. NFL teams tend to go deeper into the playbook as the playoffs go on. They know they’ve already exposed their various alignments and stock plays throughout the season. It’s time to come up with slightly different looks.

My advice is to look for systematic strengths or weaknesses in the various teams and then begin to look for the lesser lights to shine. For instance, RB1 had a good receiving game the first matchup, look for options for RB2 to shine this time. If a defense shut down WR1 in the first game, you might want to confirm they are particularly strong against their opponent’s WR1. Fade WR1 in favor of WR2 getting more looks.

Successful prop betting often means constructing a game book of how the game should play out. With fewer games to analyze, this could be a good time to approach your prop betting this way. As always, Unabated offers a great selection of prop betting tools. Everything from our unique Prop Simulator to our fast and functional Prop Odds Screen. With our new Essentials Tier, these tools are within the reach of even the most casual bettor.

A popular approach to any NFL playoffs odds is trying to parlay the results to maximize your profits on such a small betting card. Parlay bets are great if you have an edge. The problem is, NFL playoff betting is a very efficient market. It’s very tough to get an edge on these sides and totals. If you parlay bets where you don’t have an edge, you are just compounding the house edge against you. That’s a big problem.

It can be tempting to parlay the two Saturday games together and parlay the three Sunday games together. However, you’re decreasing your chances of profiting greatly. A much better approach would be just bet the games individually. If NFL betting this season didn’t go the way you had expected, now is a good time to recognize why. Did you bet too many parlays chasing that big payday? Here’s an article from the end of last season to help you conduct a post mortem on your season.

Also it is important to note that Same Game Parlays will be pushed on your by all the big sportsbooks when you look to bet props. Remember, the correlation that appears to be some ridiculous edge is already factored into the pricing. You almost certainly do not have an edge. Even if you were to parlay a team winning the game and also having more rushing yards than their opponent.

It’s not too late to bet on Super Bowl futures, although being able to brag that you knew last summer that Seattle was playoff bound is a ship that has already sailed. Believe it or not, there’s still value to be found in futures markets. Keep in mind that most (but not all) sportsbooks will take down their futures markets while the games are being played this weekend.

However, if you have finished all your betting already (In my mind, this is akin to finishing your holiday season shopping in November).You might want to check out the Unabated NFL Season Simulator one final time. Here you can let various ratings systems be your guide to discovering remaining value in NFL playoff betting.

The NFL playoffs offer an expanding menu of wagering options that are mostly the same as the regular season. However, a little bit of extra focus and extra effort in understanding how it can be different will go a long way. If you’d like to discuss these games with some fellow bettors who think the same way you do, I’d invite you to check out our Discord. You might pick up a good angle or two from the discussions. We even have a channel called #the-sauna where you can sweat your bets together.